Saskatchewan has been achieving a number of “firsts,” some of which significantly have been established during the current year, the 60th anniversary of our Province as a member of Confederation.

Our Province’s achievement and contribution in the area of sports and athletics is something of which all of Canada is aware.

Significant also is the fact that the design of this track is entirely unique. This, in itself, is an indication of the progress our province is making in comparison with some of the older and more established provinces in the country.

I welcome you all to the first invitational indoor track meet in Saskatchewan’s history during our Diamond Jubilee year, and I invite our out-of-province visitors to return at a future date to receive the hospitality which we are so proud to provide.

By DR. R. E. DuWORS and PROFESSOR J. B. LEICESTER 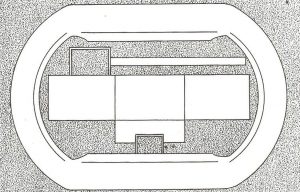 First, could we eliminate stumbling on and off corners if the stumbling were caused by track design?

Second, could we design a track on which a man in the second lane had a fair chance of passing a man on the first or pole lane? (The pole lane is the inner lane on the track.)

Third, could we build a “super-elevated” track in the way a highway curve is built?

The problem of stumbling was met by designing a unique transition section that takes a man from the straightway to the banked curve. The track is pivoted in that section, some 20 feet, between the first and second lanes.

The pivoting is possible because of one of the most striking features of the track. The straightway surfaces of all other indoor tracks are three to five inches off the floor. The Saskatchewan straightway track is 12 inches off the floor. The conventional track then rises to 48 inches on the outside. The only place a runner can avoid going up hill and down hill on the banked ends of such tracks is on the very inner edge of the pole lane. That is one reason runners fight for this position on an indoor track. It is also why men of slightly less speed can beat faster men in short races. The man who gets the pole wins. He wins not only because he is running a shorter distance, but also because the man in lane two is running up hill and down.

On the Saskatchewan track the line of constant elevation (no up hill or down hill) is 30 inches in from the inner edge, between the first and second lane. This means the man in the second lane running close to his inner boundary can maintain a constant stride the man on the pole will have a shorter distance to run but he will drop from twelve inches to three inches over 20 feet before each corner and climb from three to twelve inches when he leaves the banked end.

Which runner has the advantage? It will probably depend on the style of running a man uses but it does mean the second lane runner has a good competitive chance to pass the pole runner.

The third problem, that of incorporating “super elevation” into the track curve, was abandoned because the estimated racing gain of a super-elevated curve compared to a bank of constant curve was not worth the higher construction costs. But even this constant curvature through the length of each end is unique to this track. The curve does not run up and down throughout all its length as older tracks do. Once through the twenty feet of transition the track is constant.

These three features then, the height above the floor on the straightway, the pivot on a line of constant elevation between the first and second lane in the section leading from the straightway to the curve, and the curve constant through its length, are all entirely unique to the Saskatchewan Jubilee Games’ track.

The track is designed, physically, for a 4-minute mile. That choice of event as the one for which the track would be best suited determined the 17-degree angle of the bank. Most tracks have 11 degrees of bank. One should add that this track, as other indoor tracks, is completely portable. It will fit into any space 85 by 185 feet or a larger one as long as the 85-foot width is maintained. 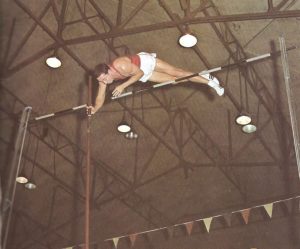 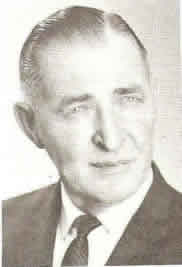 We of the Saskatchewan Jubilee and Centennial Corporation are proud of the citizen participation and involvement which precipitated during 1965 as the province significantly marked its 60th anniversary,

Equally significant in the year’s program was our decision to provide the funds for the construction of the first portable indoor track in this province. It was our hope that this track could be inaugurated with a major indoor meet during 1965. I would like to congratulate the Saskatchewan Jubilee Indoor Games Committee in Saskatoon and the Saskatchewan Branch of the Amateur Athletic Union of Canada for their efforts in making this track meet possible. I am certain it will be logged as one of the major events in this province during our Diamond Jubilee celebrations.

The objectives of the Corporation, in planning for Saskatchewan’s Diamond Jubilee and Canada’s Centennial in 1967, were to initiate events and projects with a lasting value. We know the new indoor track will contribute to the future advancement of the track and field program in this province.